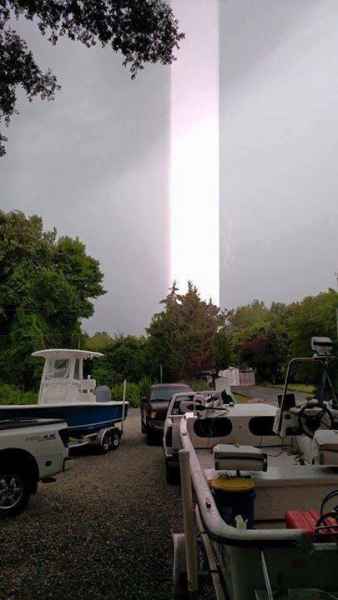 Keep your eyes open people. The pillar of light phenomenon is occurring again. It is nothing to be afraid of. This appears to be related to the changing of resonance of the Earth and to help it transition into a higher density in a less violent manner (EQ's/Physical Pole Reversals etc...).

Just as some orbs are camera artifacts so are some light pillars I am sure. This does not explain why/how people are seeing these light pillars with their naked eyes and then taking video and photo's of them. The PTB first put out articles saying they were caused by ice crystals in the atmosphere when people were reporting seeing them with the naked eye and some of these pillars were video'd and photographed from different directions by various people all seeing the same phenomenon often in the clear blue sky... Those videos and images have been pulled as fast as they are posted and the only ones left up are the ones with clouds in the bk ground to back up the ice crystal article put out when this occurred last time. There are quite a lot of images of camera artifacts of this type and of orbs that people do not see with the naked eye and only see on the image after the photo is reviewed later. Taking a photo of something you see before hand rules out a camera artifact. But this goes to show that any photo/video evidence that anyone puts forward can be debunked quickly by TPTB or skeptics. Nothing but a personal experience will suffice for most people. There will be a global event where every eye shall see and every ear shall hear (Not to sound Biblical).

The shadow wars between the cabal have heated up as well as the battle between Earth Alliance groups that have been infiltrated by the cabal and are now fighting over the financial system. There is much more going on in Asia than has been reported and there has been far more destruction in certain events than has been reported. There is heavy use of Energetic Weather and Earth Quake (EQ) technologies/weapons (Ground & Space based) as well as the use of the very few space based weapons in control of these groups (Low Earth Orbit weapons from the SDI/Star Wars Era).

These groups are being so reactionary right now they do not realize that they are hastening their own exposure and end with each and every action they take.
Stay tuned for more information, I have a meeting tomorrow morning (early morning as usual) where I will receive more detailed information on recent events.